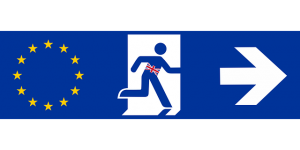 Shortly after the referendum vote three weeks ago, Whalley Range Labour councillor Angeliki Stogia wrote a short article describing her reaction to the result which you can read in full here:

The outcome of Thursday’s referendum is an almighty blow to Britain’s Northern cities.
As the first elected mainland European member of Manchester City Council, Thursday was a very sad day personally for me too. I thought of all the Europeans I know that live, study and work in this city and of my British friends that moved to Europe.
It did not take much soul searching whilst walking the streets of Manchester on the way back from the count to realise in a very Mancunian attitude and way of thinking, that taking Manchester out of Europe must not mean taking Europe out of Manchester.
Many have said that Manchester lives in a bubble: a bubble of stable Labour leadership, stable inward investment and creativity underpinned with hard work which have secured opportunities for growth.
But it is leadership not a bubble that understands how to build a city where everyone is encouraged to be successful knowing that when others are successful, our city will also enjoy in this success.
This is what helped deliver a vote to remain in the EU in Manchester.
Manchester is a welcoming, fast forward version of modern Britain which always had the guts to lead.
This has been the strategy, should still be the current and long term strategy regardless whether Britain is entering uncharted territory and a turbulent future.
Whilst our local challenges remain, in leading the way the focus should be on our future generations ahead, with a clear purpose to sprint away from crisis and to work with the cities of the North so that we grow and expand, finding ways to enable everyone regardless of where they come from to define their own success and attain their personal economic prosperity.
Talking to people across the country as a candidate in the last European elections immigration was one of the issues that came up in every single hustings up and down the North West.
Two years later, at every debate at which I have been invited to speak in the run up to the 23rd of June, immigration was still the question. This referendum has exposed a pressing need for Labour to reengage all communities in framing a firm, fair and sensible answer.
An answer for people like me who left their countries choosing to move here to carve ourselves a corner of happiness in this great country. An answer for people who have for a generation or more witnessed the effects of the post-industrial decline.
And an answer for all those who have not been in position to reap the benefits from local opportunities despite national and local support incentives and initiatives specifically designed for their support.
Manchester is uniquely placed to answer these issues by prioritising local engagement with communities in the development of how devolution is going to look in the different parts of the conurbation.
Migrants and locals have genuine complementary roles to play in our economy and society in Greater Manchester.
Our first challenge is to sustain and spread the proceeds of growth. Every part of Greater Manchester has assets that can drive prosperity, something which is vital in the development of a more inclusive and cohesive community.
All of Greater Manchester is beginning to adopt an asset based approach where we focus and build on what are the strengths and potentials of each place.
Manchester does so at an accelerated pace through ‘Our Manchester’. It is pivotal this work is intensified and built on with doorstep engagement.
At the same time, we need to bring to light the hard facts and the tough challenges with which our economy is being faced.
We need to dare to ask the hard questions about opportunity and aspirations of our local communities.
We need to ask them to ourselves and we need to ask people: listening and learning but challenging too.
Only by doing this can we are all working towards making the city the best it can be.