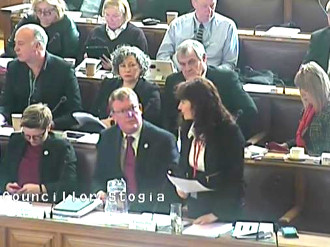 At the full Council Meeting on 21 March, Labour councillors voted unanimously to ensure that planning committee members have more transparent information from property developers about the viability of the schemes, when assessing the contribution which developers must make as part of the negotiation for planning approval.

Councillor Angeliki Stogia, who spoke in favour of the motion (link here to view her speech), says “Greater transparency from developers is important, if people are to have confidence in the planning process and reassured that new housing developments in the city centre can deliver benefits to the whole population, including access to more affordable housing”.

The full text of the motion was as follows:

Notice of Motion – Transparent Viability Assessments
This council notes that, under Labour leadership, Manchester has been one of the fastest growing cities in the UK over the last 20 years and is now generally regarded as the nation’s ‘second city’. This has meant that property development has become a lucrative industry in Manchester.

This Council notes that that there is a housing crisis in the UK which has been made worse by the policies of the Conservatives and Liberal Democrats in government since 2010. Not only have they failed to regulate the private-rented sector but the coalition government slashed funding for new social housing and failed to replace homes which were sold off under right-to-buy. In the face of this, the Council has made great efforts to ensure that ordinary Mancunians have access to affordable housing. There are 548 units of affordable housing currently under construction and 1711 in the pipeline to be delivered in the next 3 years where affordability is based on average income rather than the government’s arbitrary measure of 80% of market value.

This Council notes that developers have often used viability assessments to avoid their obligations to provide affordable housing and where this happens, it can damage public confidence in the planning process. Labour Councils in Greenwich, Bristol and Lambeth have improved transparency by making their viability assessments public.

This Council believes that the developers who make money from building in our city have an obligation to make a fair contribution to providing affordable housing. This Council seeks to amend its planning policy to: