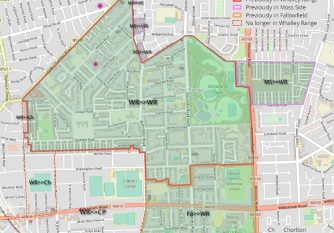 You may know already that local government ward boundaries in Manchester are set to change – we wrote a previous post about this before. This means a number of important changes are about to happen, from who your elected representatives are to how the Labour Party is organised in the city generally, but particularly in Whalley Range. The process is potentially quite confusing, so we have prepared a ‘question-and-answer’ panel which will hopefully address some of the queries raised. Feel free to ask any more questions though, using the comments section.

Why is this happening?
The Local Government Boundary Commission of England (LGBCE) periodically conducts reviews of local authorities in England to ensure that the geographical units of representation into which they are divided are fit for purpose. The last time this happened in Manchester was 2003-04.

For more information about the current review process and the criteria they use for deciding the boundaries, see the LGBCE website. One important thing to remember – the review has not been initiated by (nor is it under the control of) either Manchester City Council or anyone in the Labour Party.

What stage has this review reached?
The final recommendations of the LGBCE for new ward boundaries in Manchester were published back in April and (barring something totally unexpected) they will become law some time this autumn. The next local elections of councillors on Thursday 3 May 2018 will be contested on these new boundaries, which will come into force on that date.
So what’s the difference between a ward and a branch?
A ward is the geographical ‘unit of government’ within the council. In Manchester, each ward is represented by three councillors who are elected for a term of four years each under the system of voting by thirds (see this page for more information).

In order for Labour to choose candidates for and campaign effectively in local government elections, most (though not all) areas are organised into Branch Labour Parties aligned geographically with council wards, and this is the case in Manchester. So the City Party has begun a process of reorganising local branches in accordance with the new ward boundaries.

What does this mean for Whalley Range (ward and branch)?
To see the changes to the boundary in this area, click the map above (or download a PDF here: Whalley Range ward transition 2017-18). Some Labour members who are in the ‘old’ (ie current) Whalley Range branch will soon be in the ‘new’ Chorlton or Chorlton Park, some members currently in Moss Side and Fallowfield will be joining the ‘new’ Whalley Range, while the majority of ‘old’ Whalley Range members will also be in the ‘new’ branch.
Can’t I choose which Labour Party branch I’m in?
Unfortunately, no. Many branches are happy for members from other areas to help campaign and informally attend their meetings and social events, but to participate in formal debates and (in particular) branch elections, you must live within the boundaries of the branch.
What about constituencies – and CLPs?
Just as wards are units of local government and Labour Party branches follow their boundaries, so a constituency is a unit of national government (represented by a Member of Parliament) and CLPs (Constituency Labour Parties) are organised accordingly to select candidates and fight parliamentary elections. So every Labour member in Manchester is in both a Branch and a Constituency Labour Party.

But aren’t the constituency boundaries changing as well?
This is where it gets more confusing.

There is an entirely separate review of all parliamentary (ie constituency) boundaries currently underway, which is due to be completed in September 2018. This is being undertaken by the Boundary Commission for England (which is different from the LGBCE) and you can read about it here. The BCE have already produced their first proposals, and ironically have proposed no changes to our local constituencies including Manchester Gorton, so the mis-alignment between wards and constituencies would be set to continue.

It’s possible that the final BCE proposals will address this disparity, but they aren’t due to be enacted before 2020 – and it’s also quite possible that they won’t be approved by Parliament at all as they are much more contentious than the local review, in which case the exising constituency boundaries would persist. So for the time being at least, while your Branch Labour Party (BLP) may be changing, your CLP (and MP) will stay the same.

So will the branches all change at the same time as the wards, ie next May?
No. Although the new wards won’t become effective until next May (and the currently elected Councillors will continue to represent their ‘old’ wards until then), Labour branches need to prepare now by selecting candidates and organising election campaigns for the new boundaries. So under the direction of City Party, there will be an Extraordinary General Meeting of Labour members in each of the changed ‘new’ ward areas (including Whalley Range) to constitute a new Branch party and elect Branch officers. This is due to be held in September, following which (in October) there will be meetings to select three candidates to contest the 2018 elections.
Why three election candidates?
Because the boundaries are changing, the 2018 local election will be what’s called an all-out – ie every council seat is up for grabs (even though most current councillors will have served less than the normal four year term). Electors will be able to vote for up to three candidates. The candidate getting most votes will have a term of four years, while the second and third placed candidates will have terms of two and one year(s) respectively.
I’m a Labour member in the ‘new’ Whalley Range ward/branch area. When will I hear about this EGM?
The process of organising the meetings is being led by the City Party. All members who are eligible will be notified of the meeting time, date and venue at least seven days in advance (probably by email).
I have another question
Please use the contact form or leave a comment below.